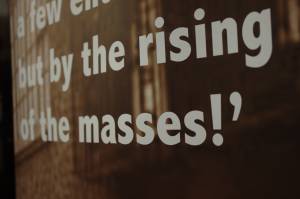 As someone whose PhD is about the 1984-5 miners’ strike, I think of myself as something like a labour historian. There is of course a strong tradition of labour history in Britain, often associated with broader radical impulses to recover history from below. It was, and still is, often motivated by a desire to bring working-class people into historical narratives frequently dominated by elites. As Brecht’s worker reading history asked: ‘Cesear beat the Gauls. Was there not even a cook in his army?’ But my motivation for the event was a sense that at least among university-based historians there is not the same interest in labour history as there once was. This at least in part parallels a decline in the power of the labour movement in this country. So I thought it would be worthwhile to discuss why it might still be important to do labour history.

So we gathered in the Marx Memorial library, surrounded by an exhibition on socialist opposition to the First World War. Mary Davis talked to us about this exhibition and the history behind it. She reminded us of those radicals who had resisted the war. She also told us about a time when you would have to be an idiot not to be interested in labour history. Yet it made me think – is a labour history of the First World War really one of opposition? Is there not a risk of conflating working-class and left-wing history? Sarah Boston – filmmaker, writer and trade unionist – argued for the central importance of women’s role in labour history. And it was an important reminder of the exclusions that have existed in portrayals of the working-class past. This was a theme picked up in the discussions. A couple of people suggested that labour history became less popular because of how narrowly such history was often conceived. Doing the same thing again isn’t an answer.

The discussion wasn’t just about how we should do labour history in universities though. Jeff Howarth, the librarian at the TUC Library Collections, spoke about their attempts to reach broader audiences. He talked for instance about the possibilities in digital technologies. But not just digital – the library has produced one portable exhibition on labour history, and is planning more. They have also been involved in oral histories. For example, they hold some of the interviews done by the Britain at Work project with London trade unionists. Some of those involved in Britain at Work were in the audience and told us about the project. And it made me think that regardless of academic trends, the history of working lives still mattered to some people. Our last speaker was Owen Gower, who directed the excellent recent documentary about the 84-5 miners’ strike, Still The Enemy Within. Particularly interesting was the way in which the film had been used to create discussions around the strike, its legacy, and its meaning today. It’s a great example of how an historical film can be made that feels directly relevant to radical political concerns today.

Discussions followed. And even if I could, it wouldn’t make sense to try to recall the whole thing. But one question from an historian in the audience has certainly stuck with me: how can I make my research dangerous? She described how her labour history was now quite well accepted in universities, but she wasn’t sure it was a challenge to the powerful. It’s hard not to feel that labour history only seems like a threat when there’s a labour movement that is a threat. So of course we have to be activists and trade unionists as well as historians, if we can. But we can’t simply will a powerful trade union movement into existence. As always – more questions than answers. So many particulars. So many questions.